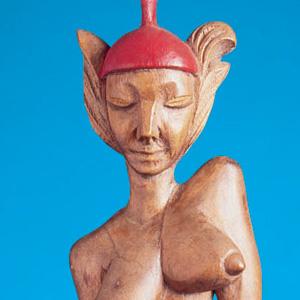 According to Pierre Fatumbi Verger, the religion of the orishas is linked to the notion of family. “The orisha would, in principle, be an ancestral deity, which in life, had created links to guarantee its control over certain forces of nature, such as thunder, wind, fresh or sea water or, then, to assure it the possibility of performing certain activities, such as hunting, metal work, or even to gain knowledge of the properties of plants and their use". Through this mythical legitimisation, the orishas can be defined as “a pure force, immaterial axé*, which can only be visible to human beings when they incorporate one of them".

[*the power to make things happen]