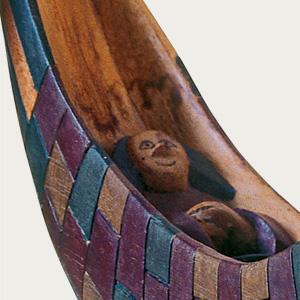 Old age and death are the subjects of unique figures in Brazilian folk art. While some works favour the realistic aspects in the ritual of death, others emphasise its comical and fantasy aspects. Some figures by artist Zé Caboclo, for example, "An old couple smoking their pipes" or "Eating bananas", show a view of old age in which work and marital relations continue. "Pauper’s funeral" by artist Bendito from Pernambuco shows a type of ritual in which the deceased is carried to the grave in his own hammock. Antonio de Oliveira from Minas Gerais, however, celebrates death with a procession in which those living carry the deceased to drink.