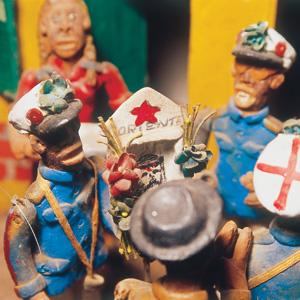 This is a religious collective festival involving singing and prayer. Today its processions consist of groups of men and women accompanying the cycle of the Holy Spirit with music and song, carrying its symbol – the banner with a white dove – and other religious objects associated with the sacred figure. The Festival of the Holy Spirit or Holy Ghost - considered almost always as synonyms - was brought to Brazil in the 16th century in the early days of colonisation. However, the festival assigns part of the festivity that, although extremely important, keeps a certain independence from the group of festivities of the Festival of the Holy Spirit itself. Generally, several months before this festival other less formal revelries, with no set date, are organized, designed to encourage donations towards the banquet and other festivities of the grand event. Today, the festivals or revelries of the Holy Spirit in the towns of Pirenopolis (Goiás) and Parati (Rio de Janeiro) already transcend the nature of a religious festival and have become tourist attractions. Given the time when they are celebrated and the fervour inspired by the Holy Spirit, these festivals are eventually a stage for many folklore and religious expressions, such as: cavalcades, mozambique, Maypole and other dances.