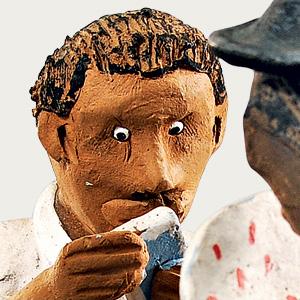 Nowadays collective games and amusements for adults are not so common. Outside the sphere of sports and major festivals – for example, Carnival everywhere in Brazil and in other traditional festivities – it is increasingly customary for “amusement” to be missing from the active participation of those who are “enjoying themselves”. But, in contrast to the trend of giving too much value to work, with the resulting loss of space for play in social life, there are still sectors and groups whose habits include collective “entertainment”. In Brazilian folk art, this type of “entertainment” is widely represented. The scene of adults playing and being amused – football, drama, snooker, hoops, etc. – far from referring to past amusements, reveal a contemporary concrete world where it is possible to combine work and other forms of recreation of a more collective nature.