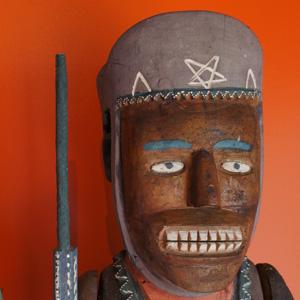 Cangaço was a form of social banditry located historically in Northeast of Brazil between 1870 and 1940, characterized by the activities of independent armed groups, led by strong leaders. The bandit is an ambiguous social character: although they engage in cruel and criminal activities such as looting, robbery and murder, they are not regarded by the local community in the same way as a common criminal. They often appear to be the victim of circumstances and unfairly persecuted by police. The most famous of these leaders was Virgulino Pereira da Silva, known as Lampião, the King of Cangaço. His exploits with his wife and accomplice, Maria Bonita at his side, turned to legends after his death and feed the fantasy that is built around giving more power of the weak.

Facts that tell important aspects of "official" history of Brazil, seen from the perspective used by textbooks from the 1950s and 1970s.

Vitalino Pereira dos Santos, Mestre Vitalino, is an iconic figure in Brazilian folk art. He was born in 1909, in the village of Ribeira dos Campos, near Alto do Moura, in Caruaru (PE). Raised in a brickyard, he began modeling small clay oxen and other animals as toys, which were then sold at the local market. It was these sculptures that called attention to the vast field of popular artistic creation in the major urban centers. Introduced to the public in 1947, at a group show organized in Rio de Janeiro, which featured the work of craftsmen and folk artists from Pernambuco, Mestre Vitalino became a leading figure in the world of folk art, little known until then. There were a number of stories told about him, many of which acquired an almost mythical dimension. This made it possible for us to understand the harsh realities of life in the backlands of the Northeast in the 1940s in a new way, hitherto unthinkable: from the point of view of the principal protagonists themselves through the art. Vitalino is known as “Mestre” for his virtuosity and for his leadership among the other potters in his region. He died at home on January 20, 1963, the victim of smallpox, at 53 years of age.