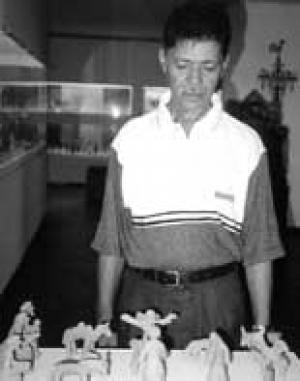 Luiz Antonio da Silva was born in 1935 in the village Alto do Moura, Caruaru, Pernambuco State. His mother made earthenware and taught him to model the clay, but he attributes his professional initiation to Master Vitalino, with who he enhanced his technique. He married Odete with whom he had nine children. He would create regional characters but also specialized in urban themes, especially depicting progress and the use of machinery. His work is easily identifiable since he was the first to invent scenes and characters. Some worth mentioning are: the photographer, electricians repairing transformers, cars, trains, canal tile factory and so on.