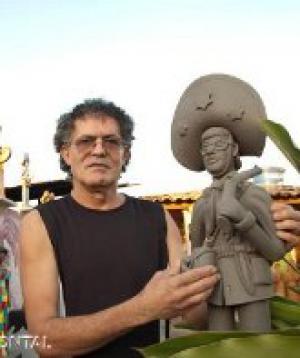 Ceramist Luiz Galdino was born on 8 April 1958 in Alto do Moura, Caruaru, Pernambuco State. His first work in the art of clay was a traditional style, continuing with the style that was to make Alto do Moura and its artists famous. However, during his career he received and assimilated different influences. Currently, he coordinates a production line in which several artisans work. He understands that the market not only provides the material needs but also stimulates the imagination. He sells all over Brazil and, in addition to the more individual sculptures, also produces works in series, using plaster moulds. His personal creativity is more focused on singing, composition and the original way in which he organises his work place. In 1984 he launched a vinyl record and in 2009 produced a CD in which he interprets his favourite music. The Casa do Pontal Museum has works from the artist’s early phase, when he was still working under the inspiration of the regional traditional art.