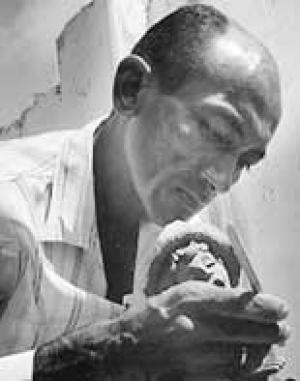 José do Carmo Souza was born in 1934 in Goiana, Pernambuco State. Since 1940 he has been modelling clay figures of dolls, storks and hens, which he sells in the market to help the household budget. His father was a baker and his mother a washerwoman. He was still young when he became well-known and encouraged by the town mayor, who offered him an oven when he was nine years old. He continued his apprenticeship, developed his own style and produced figures between 30cm and two metres in height, of various thicknesses with hollow centres. His strong personalized work combines sophistication with robustness. His band of black angels is a highlight in the Casa do Pontal Museum.