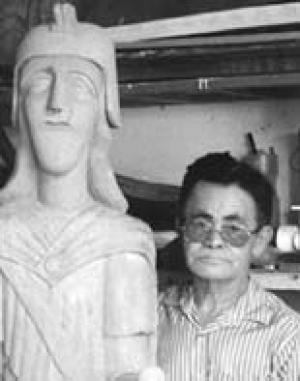 In 1916 José Alves de Oliveira was born in Valença, a town in the interior of Piauí State. He was married and had six children. He was cabinetmaker by trade and began sculpting in Teresina, the state capital, carving ex-votos for which he charged nothing. In this town, he tried his hand at different jobs; watchman in a public square hired by the city hall. Later he set up a food stall in that same square. At the request of the local parish priest, who knew about his work with the “votive offerings” (ex-votos), he specialised as saint-maker, beginning by carving sacred images for the church on Vermelha Square to replace the plaster images. His figures are carved in cedar, very often life size. The regionalist theme is evident in the attire of his images of saints and angles decorated with cashews, foliage and typical regional flowers. He died in February 2000 in Teresina, Piauí State at the age of 74.