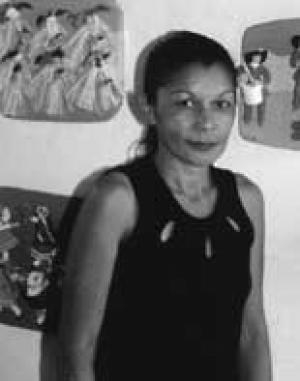 Maria Candido Monteiro was born in 1961 in Juazeiro do Norte, Ceará State. By working together with her mother Maria de Lourdes Candido and her sister Maria do Socorro, they became known as “the three Marias". Their work was quite similar to each other’s but each artist maintained their own production. Maria Candido produced well-finished pieces. She was inspired by photos in magazines, newspapers or other visual media with which she came in contact, always mixing them in her imagination. Very often she would start to shape the clay with no specific intention and in the end was surprised with the results. In addition to decorative wall plates, which she called “themes”, she created scenes of Epiphany festivities, square dancing and the Nativity. She died in August 2012.