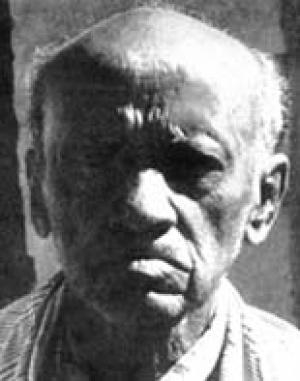 Francisco Biquiba was born in 1884 in the tiny village of Santa Maria da Vitoria, Bahia State. He learned to work with wood as an assistant in carpentry and cabinetmaking. With the saint sculptor João Alves de Souza, he specialised in making saints, also carving altars for churches and small domestic shrines. Since there was not enough work in this area, he would do any kind of job: making barrels to carry water; furniture, timber for roofs, and so on. He would help build boats in Santa Maria, beginning to sculpt figureheads for vessels in 1901. In 1963, he would give a name to his sculptures, signing as F. Guarany. He is acknowledged as the most important artist in this specialty. In 1974 Master Guarany was still alive and active. According to Paulo Pardal, the top researcher on the subject, on this occasion the artist seemed to demonstrate "(...) the same inspiration and skill, purity, honesty, enthusiasm as he had with his first figurehead when he was 17 years old". Master Guarany died in 1985.