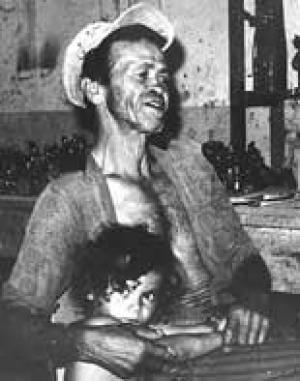 José Rodrigues was born in 1914 in Campos, Pernambuco State. His mother made earthenware and as a child he began modelling little horses that he would sell in the market. In 1931, he moved to Alto do Moura. After he married he moved to Recife where he worked in the port there. The ceramist Elias taught him the art of clay. Inspired by the port activity, he began modelling ships, but soon moved on to religious themes and biblical figures, encouraged by the illustrations in the New Testament. His best-selling figures are St. Francis and Jesus Christ. He also reproduced folk presentations, such as maracatu and bumba-meu-boi, as well as producing figures working in their professions. He is deceased.