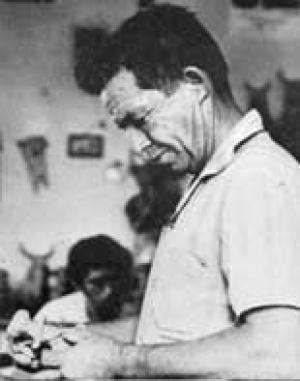 José Antonio da Silva was born in 1921 in Alto do Moura, Pernambuco State. He learned to work the clay making children’s toys, watching his mother and sister who worked with utility handicraft. He married Celestina Rodrigues de Oliveira with whom he had eight children, and created a real family pottery workshop, which produced a wide variety of work. Nicknamed Zé Caboclo, he became one of the most admired artists of Caruaru. He was decisive in contributing, together with Vitalino and Manuel Eudocio, his brother-in-law, to setting a style in the art of clay figures in that region. In partnership with Manuel Eudocio, he invented new techniques and forms, adopting the use of wire in the structure of the sculptures and bulging instead of inset eyes. He is the author of the large merry anthropomorphic water jars, such as "Lampião and Maria Bonita", the sculptures of the Virgin Mary and the stunning bumba-meu-boi and maracatu figures. His children Antonio, Zé Antonio, Paulo, Horacio, Marliete, Socorro, Carmelia and Helena are renowned artists. He was still fairly young when he died from schistosomiasis in 1973.