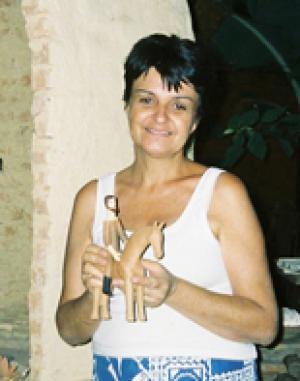 Lunildes de Oliveira Abreu was born on 12 December 1953 in the town of Pirenopolis, Goiás State. She is married to Antonio Pereira de Abreu, and has four children. Her interest in the art was expressed when still a child and she would collect old roof tiles to paint on their back. In her youth she came in contact with Maria de Beni’s work, and would reproduce miniature horsemen of the Cavalcade Festival. She was inspired by it and set her hand to make some miniature horses to be displayed in the local handicraft centre. A collector saw her production and in admiration encouraged her to continue her work. The masked horsemen by Lunildes are made in clay and their clothes and masks are tiny copies of the actual accoutrements. The traditional Cavalcade festival in Pirenopolis is part of the Holy Spirit celebrations and reproduces the battle between Moors and Christians. The artist says that the “festive spirit” is contagious and she works hard and tirelessly during the festivities. In addition to making more horsemen than normal, she is also involved in the festival preparations. Lunildes is widely known for her work and she and her sister, who is also an artist and makes masks for the Cavalcade revellers, exhibit every year at the town’s arts centre.