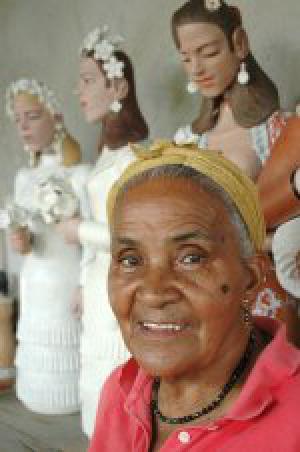 Isabel Mendes da Cunha, known as Dona Isabel, was born on 3 August 1924 in the rural zone of Itinga municipality in the Valley of Jequitinhonha, Minas Gerais State. She was still very young when she learned from her mother to work with clay. She would create pots, dishes and Nativity figures, which she continued making even after she married and moved to Santana do Araçuaí in the same region. Her work has always been considered very well made, which is why she sold a lot in the markets of neighbouring towns. With the arrival of collectors, government institutions and storekeepers, Dona Isabel was encouraged to return to her childhood themes, creating original figures that were immediately appreciated. Her large brides were definitively her trademark. Dona Isabel’s availability to teach made her a master of the trade. In 2004, Dona Isabel was awarded by UNESCO, and the following year received the Order of Cultural Merit from the Brazilian government in recognition of her work in favour of Brazilian culture.