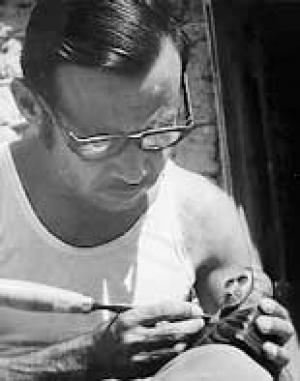 Bigode is the nickname of sculptor José Alves da Silva, born in 1929 in Goiana, Zona da Mata, Pernambuco. When he was six years old, against his father’s wishes, he began his artistic apprenticeship sculpting figures based on the mamulengo puppets for his sisters to play with. Later, he would carve figures of saints for his grandmother’s shrine. Continuing with these projects he moved to Olinda, where he became famous as a sculptor of saint images. His best known works are the figures of St. Francis, St. Joseph with Boots, the Man Jesus, and Christ. He also produced angels, pombas-giras [Afro-Brazilian deity] and images of Buddha. Although he is distinguished for his religious creations, he greatly appreciates the aesthetic and sensorial.